Liberia has self serving self hating traitors who are prostitutitng her. 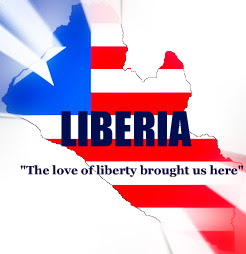 Now to the many people in the diaspora of African descent many wonder why are non blacks coming to Africa while millions of Africans still stay in outside of the continent without opportunity.The African American business and political class are responsible for the renewed interest in Africa and the confidence and optimistic outlook of Africa.From comedian Chris Tucker,Ambassador Andrew Young and Bob Johnson now West Africa has regular flights from Delta going from West African cities.The embrace of Africa by the Black middle class will mean billions in tourism and a permanent connection on both continents.African American officials and activist helped get the AGOA,African Growth and Opportunities Act passed as law.In addition to the federal law African American mayors,governors,Congressmen are creating local incentives and special trade zones for African countries.All of this unlike China is done out of kinship and love.
African elitist intellectuals are eroding the bond
These so called intellectuals have no love for their homelands outside of self serving goals and instigate conflict with not just NGO's but the large and powerful African diaspora.Instead of looking to build common bonds with fellow Blacks across borders they seem to compete with other Africans to see who is not in last place.But a hardy hand is extended to the White Europeans,Lebanese,and the Chinese to come in an bleed the continent dry.In Liberia for instance many native Liberians still see the descendants of the African American freedmen who built Liberia and made it a model nation as invaders and settlers,but they want the Lebanese who contributed nothing to Liberia to have full citizenship.THE FOLLOWING IS A CONVERSATION BETWEEN SELF HATING ANTI BLACK LIBERIAN EXPAT LIVING IN THE USA EDWIN JONES AND A LEBANESE.


Edwin Jones
Alaa I support Non blacks becoming citizens of Liberia.I think it is an atrocity that in 2010 our constitution continues to promote clear cut racism.From discussions that I have with other Liberians the sentiment is that, and permit me to use the economic power of the Lebanese
will get so strong that it would further drive the average Liberian deeper into poverty.
what are your thoughts?
2 You were born in Liberia so I consider u a Liberian what do you consider yourself as?
February 27 at 2:14pm · Like · 2 people
Alaa Ismail
im a Lebanese Liberian. i have the right to be a Liberian citizen the same way u have the right to be a Liberian American with American citizenship,
As for the Lebanese econmical power in liberia its something essential to liberia, and lebanese are not the ones who are making the liberian more poor, its those who are steeling the resources from the country covered with NGO and the free money the is donated to the country but believe me nothing is free,
And lebanese are doing business only and not going to resources coz they know that the resources means problem for them, they are under the law and not above the law as others are doing.
Man u have to look at liberia which community is building in liberia,
February 27 at 2:26pm · Like · 5 people
Tmz Liberia Well said brother Alaa.. Your turn Mr. Jones..lol
February 27 at 2:30pm · Like · 1 person
Alaa Ismail
u understand what im saying, if i tell how much lebanese can suffer in liberia, when others dont ,and what lebanese have give to this country others didnt,
Can u imagin one lebanese he came to liberia by ship. after 70 years he wanted to go...See More
February 27 at 2:34pm · Like · 3 people
Edwin Jones TMZ I am on Alaa side and I am impress at how he articulated his stance. It is my hope that the Liberian legislature would dim it prudent and rectify this blemish installed in our constitution.
February 27 at 2:35pm · Like · 5 people
Tmz Liberia I know my brother ED.. Just wanted u to land..lol
February 27 at 2:36pm · Like
Alaa Ismail Bro Edwin, hope thing will become better, and belive me if they work on the constitution liberia will grow and become more developed. just check the methods of building, a building can be built for it to last for the duration of the lease ..and many other things
February 27 at 2:37pm · Like · 2 people
Tmz Liberia Thanks for ur thought.. itz time to scrap those racist laws that have kept us in the dark.
February 27 at 2:37pm · Like · 2 people
Tmz Liberia THE DUAL- CITIZEN BILL MUST BE PASS..!!!!!!!!!!!! NON-NEGRO DECENDENT MUST BE ERACE..bUT WAIT, WHAT DECENDENT ARE LEBANESE? THOUGHT THEY WERE BLACK BECAUSE THEY ARE CERTAINLY NOT WHITE..
February 27 at 2:39pm · Like · 1 person
Edwin Jones
For me First it is not even an economic issue I understand why Liberia was founded and defintely can understand why it was necessary.
Now it is overdue I believe those in the 1980s that did the amended the constitution miss an opportunity. ...See More
February 27 at 2:46pm · Like · 2 people
Berenice Mulubah
There are lot of advantages and disadvantages from a nation going into exile. If you really believe that the Liberian culture is going to stay the same, you got another thing coming, when those people from exile return. All this, it's a t...See More
February 27 at 2:52pm · Like · 2 people
Alaa Ismail Ok bro.
but suffering got so many descriptions.
suffering from being bord,
suffering from not being with your family and friends
suffering that you are ways from your girl friend.
but where i mention it..
February 27 at 2:52pm · Like
Tmz Liberia Ma B wait let some of those Oldmom in the village see their son picture butt NAKED standing infront those white chicks..
February 27 at 2:58pm · Like
Alaa Ismail Thx Hassan Fadiga
February 27 at 2:58pm · Like · 1 person
Hassan Fadiga They still have the slave mentality...its so sad..
February 27 at 3:02pm · Like · 1 person
Posted by Kala Nation at 4:12 PM