President Sirleaf vs Winnie Mandela.Who Does the West like Better? 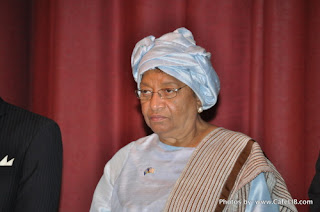 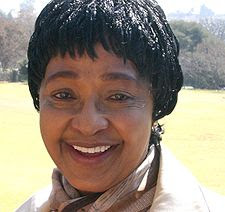 The former Wife of the great African Nationalist leader Nelson Mandela came into her own during the imprisonment of her husband.Nelson Mandela was sent away to Robbins Island in 1963 and from recent reports his imprisonment nearly broke him.The recent letters tell a different tale of a man ready to leave it all to be with his family.Winnie and her daughters faced harassment by the South African police and the Apartheid government.Now in most cases no matter what a person's political belief a wife and children are usually given sympathy and support even to those who oppose them.Not so with Mrs Mandela,I remember the right wing media and even the so called liberal media in America vilifying her during her husbands confinement.When Mandela was released in 1990 she was at his side.

That same year 1990 Charles Taylor and Prince Y Johnson of Liberia captured and executed Liberian President Samuel Doe.Doe the once puppet of Ronald Reagan his hero,was abandoned as the Soviet Union was collapsing and he and his state were no longer needed.The next few years showed the hypocrisy of the selective concern of the West.In South Africa during the negotiations to end Apartheid Winnie Mandela with her fire speeches made Whites in South Africa uneasy.Which may be understandable,but what is not is the question-why are so many Whites in America and Europe against her?Winnie is an uncompromising woman who wants to take her country back from the White man.In a lavish visit from the Queen of England she quirked"What a big waste of time and money"This was the feeling of the average Black South African who lived in poverty and saw no benefit to letting White people keep 80% of the land and most of the wealth.Winnie was also an outspoken Pan Africanist who called for the unity of South Africans and African Americans across the Atlantic.Saying the two groups futures are tied together.All of this drew the wrath of the White power structure who wanted minimal change.

President Sirleaf was behind the demise of three Liberian Presidents
Now the darling of the West Madam Ellen Johnson Sirleaf a woman who was embraced by the world because of her settler heritage,but then distances herself from that heritage in order to gain political advantage has blood on her hands.The point is while Winnie Mandela may have incited violence in the townships Sirleaf calculated two wars that took at least 250,000 innocent Liberian lives.The root of it is her belief that women make better leaders because they make better decisions.What decision was that Ma Ellen?Was it the decision to work with outsiders safe out of harms way while you financed the destruction of Liberia?When Sirleaf's party lost the election in a humiliating defeat to Charles Taylor in 1997 by 75 to 10% she refused to concede.Thereby starting another conflict and getting the international community to go against Taylor.Taylor was her protege but when he refused to hand over the government to her she went to war against him.Now while she is being interviewed on Oprah and giving commencement speeches at Harvard her country is sinking into the Ocean.Men make about 20 cents an hour for hard dangerous work.The worst companies basically bleed the country dry and put nothing back but its okay she is a woman that is the main thing.Now my point on all of this is to say that although war is ugly and we must move forward.Why does the West choose who is is good and who is bad?Is the person serving the interest of Africa?It seems that when they do they are demonized by the West.But when they suggest things like putting a military base in Liberia then they are a so called enlightened leader.Winnie is not perfect but she new used the term "Girl Power"a divisive term used blame men for the shortcomings.Yes women got together to end Liberia's war.But it was a woman who kept war in Liberia until she got what she always wanted the Liberia Presidency.Now her family intends to keep it forever.
Posted by Kala Nation at 9:00 PM

Charles Taylor and Prince Johnson did Not Kill President S.K. Doe, it was Prince Johnson alone and in his territory.
Prince Johnson and Taylor were sworn enemies and did not unite for a moment just to kill president Doe.
Get your facts correct Dwayne Makala.