The Ma'at way challenged.What is the African way? 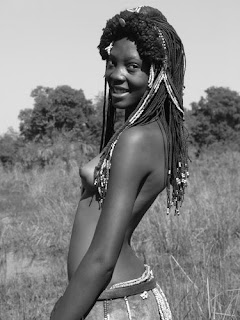 There was a recent debate on facebook where a sister of the Ma'at set was challenged by a young girl about a photo of an African village girl.The photo shows a smiling pretty African girl.One young lady commented that she looks happy and content and that she envied her.The Ma'at sister implied she was only happy because she was uneducated and she had no knowledge of the outside world.The bigger question is what is African?Black middle class reactionary politics of Ma'at rooted in feminism and Marxism or one that embraces the world as you see it?Africans are very adaptable to the challenges they face.It is doubtful African Americans could survive without the world the White man created for them.Africans more and more are making the choice to join the modern world on their own terms at their own pace.This is not enough for the feminist posing as Pan Africanist in the many movement born in the Black American experience.They want to superimpose their idea of female equality and the idea of the oppressive social order on the African woman.The result in their minds would be more women in nightclubs until their 55 years old.Chasing some American dream never marrying and blaming men for their misery and failures.Now the race is on to give African women opportunities while not letting them get poisoned with the man hating Oprah like foolishness.The following is a debate following a photo of a Botswana village girl photo: