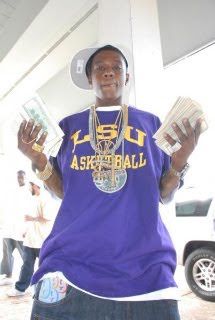 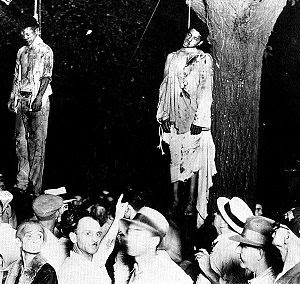 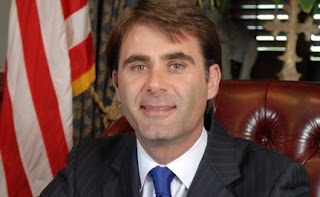 Southern trees bear strange fruit,
Blood on the leaves and blood at the root,
Black bodies swinging in the southern breeze,
Strange fruit hanging from the poplar trees.

Pastoral scene of the gallant south,
The bulging eyes and the twisted mouth,
Scent of magnolias, sweet and fresh,
Then the sudden smell of burning flesh.

Here is fruit for the crows to pluck,
For the rain to gather, for the wind to suck,
For the sun to rot, for the trees to drop,
Here is a strange and bitter crop.


Kalagenesis
The above was a song written by a Jewish school teacher in the Bronx NY but immortalized by the legendary Blues singer Billy Holiday.The song describes the South of the Post Civil War era.What is unique to the South is the level of human degradation that the Black race endured and continues to endure.The practice of lynching which many experts acknowledge happened throughout the United States since the beginning of this country by no means was confined to the Black race.Everyone from suspected witches,criminals,rapist,foreigners,cheats all were lynched in almost every part of the country.The persecution of the Black people and the level of violence and savagery is something unigue to the American South.In other parts it was mob violence motivated by lies and false acusations.In the South the lynchings involved any Black person who happed to be in the mobs path.And they happened for the pure carnival like atmosphere bring Whites together for a blood thirsty orgy of savage violence.Tulsa Oklahoma,Wilmington NC,Rosewood Fl,St Louis,ect all were attempts at genocide,and the subjugation of the Black race in America.The blood that stained the Southern soil has and still is producing strange fruit.
South Carolina is the definition of the Strange Fruits
The past 20 years while some Southern states have made progress in bringing a New South for its residents.By attracting people from different parts of the world North Carolina,Virginia,Maryland has in fact turned into fairly progressive states.In South Carolina the home of the Godfather of the old segregationist south Strom Thurmond,the state has not moved at all in terms of race relations.White people no matter how uneducated still think they are the superior of Black people.Racial profiling and the Ku Klux Klan still is the order of the day.Now we see the racism seeping into the national stage.Republican Senator Jim Demitt says he wants to use Health Care to break President Obama.Congressman Joe Wilson screams"You lie"infront of Congress at the President,now we have a Lt Gov from that state making a statement liking poor people to animals saying we should not feed them.Now I wonder why no one from this state has spoken up about the crazy racist people in charge in that state?
Southern Trees Have born very strange Black Fruits
When looking at the African American community one cant but notice the very different Southern Black community.This is the community of Tyler Perry,a community still struggling with the direct effects of slavery.From a cultural standpoint the South did not experience the Harlem Renaissance or the Big city dynamics of Detroit or Chicago.What was unique about those areas like New York was the creation of Black enclaves where Black people were parts of those cities.This created a natural sense of unity and kinship which the South did not have, with the exception of Atlanta.Now the music and culture of South Hip hop seems to be the most popular Black music.But if one looks at the language and self degrading images of the South and look at places like Miami,New Orleans,Virginia and see the almost daily carnage which by itself is bad enough.But to Whites in the South this is entertainment.Black on Black crime here in the South is seen as normal.White people are never bothered by so called bad neighborhoods or high crime rates.They are oblivious to the daily carnage as if they are bulletproof.Why is the South the only place in the US like this.It is because it is so rooted in apathy and a system of White supremecy that the people Black and White dont question it just accept it as the natural order.In the South Black women can have seven children and never even expect to get married.Fathers have no fatherly relations with their kids,on the whole it is normal not to know ones father.White people control all of the wealth especially Black people's like it is theirs.This is the Strange Fruits of the Modern South
Posted by Kala Nation at 6:36 PM

Please, please, please, tear South Carolina down every time you get the chance. Your article is excellent. This place is hell on Earth. When college friends from the North or West visit me, it's culture shock. 2010 SC is no different than the U.S. in the 1930s, AND I'M NOT JOKING !

Anyway, this isn't why I'm emailing you. In about two weeks, I plan on doing my first "beat-down" type Blog Talk Radio show.

Unlike the sequence of lectures I've been composing, the entire scope and purpose of this program is to beat down people that fill of my email box with over 150 emails a day. They are from various study groups that I expect were founded in prisons.

They have a bunch of foolish ideas, but the one that really burns me up is that there's no need for medicine, doctors, nurses, or hospitals, and things like A.I.D.S. aren't real. Yes, I read fool talk like this on a daily basis. It brings me to the point of rage, but I generally (and politely) respond, and tell the idiots why I don't agree that you can cure cancer with herbs. These people have conspiracy theories you...well, yeah, you would believe it.

Therefore, well in advance, I will post a note about the show, which will be at least two weeks away. During that time, I'll be contacting a lot of these people with these beliefs, and my intent is not to be nice. I want to mop the floor with them. Just take note of the date ( I'll email you about it ), and you can either listen, or needless to say, I'd love for you to call in and have some fun with me.

Trust me bro. There will be a lot of hurt feelings after this show, and they wont be mine.

Brother George,thanks for the post.I dont know how you stay in that hell on Earth!!!!Ive only driven through there as a child but from the stories Ive heard oh my God.Also brother I commend you for staying around your family,we nee to let people know what is going on in South Carolina.Im looking forward to your next show.